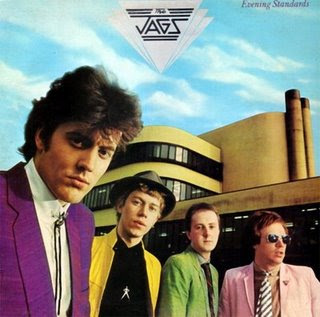 Like finding a stack of old baseball cards in your parent's attic, I stumbled upon this beautiful bit of digital flotsam that brought about that same release of nostalgic joy.
Just a simple mp3 of the only hit from a short-lived band from England. It was enough to bring a downpour of memories. The Jags' "Back of My Hand" is a very delicious piece of power pop candy.

Released in 1979, "Back of My Hand" made it to #17 on the UK charts. It was included on the album "Evening Standards" the next year, when it made its appearance stateside and quickly found its place in the nation's bargain bins.
However, the song emerged at the right time for me. It was the summer between junior and senior years of high school. The song is full of heavy beats, angst, lust, harmonies and a hook that won't quit. My brother's band played it. For them, it was the great, hip cover of a little known hit from an even more obscure British band. A nice little stamp on the growing hipster cred. Plus, it was easy to play.
I've must have listened to this song at least a thousand times - a large percentage with air guitar accompaniment. Most of that time between the ages 17 and 18. The vinyl made the trip to college where it would be broken out at parties whenever I commando-ed the turntable. Ultimately, the album was lost during the Great Mold Tragedy of 1995.
The song returned to the fringes of cultural consciousness in 2006 when it was included in a forgettable soundtrack. However, the first and second (and final) albums remain lost to the dusty bins at record or second-hand shops. They can't be found on iTunes or Amazon.
But their single remains. It brought about a myriad of memories of the time when the music was constant and essential. I'm sure I wrote a girl's number on the back of my hand.
Posted by marty at 4:11 PM No comments:

Email ThisBlogThis!Share to TwitterShare to FacebookShare to Pinterest
Labels: The Jags 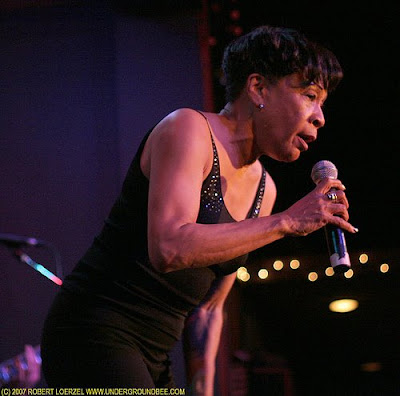 Quite simply, Bettye LaVette is the best interpreter of rock music going.
Possessing an incredible, soulful voice, LaVette consistently wrings out new levels of emotion from songs long lost in the classic rock radio ghetto.  The best, recent example is LaVette's soaring take on The Who's "Love Reign O'er Me" at the Kennedy Center Honors.   Pete Townshend, who was being honored and the song's author, was reportedly moved to tears by her version.
Like a modern day Sarah Vaughn,  LaVette reinterprets the standards of the day.  Instead of recording Duke Ellington or Henry Mancini, LaVette covers Neil Young, Elton John and Sam Cooke. At her recent SunFest show, she performed searing versions of songs from Lucinda Williams and George Jones. During the show, the 63-year-old strutted and danced like the professional she is with 48 years in the business. She did take a break - a "senior citizen moment" - near the end of the one-hour set to sit cross-legged at the edge of the stage for an intimate ballad. It was a wonderful, albeit short, concert.  LaVette is a treasure.
Below is a great recording of LaVette at Joe's Pub singing a killer version of Neil Young's "Hear of Gold."  Enjoy.
"Heart of Gold" by Bettye LaVette (mp3)
Posted by marty at 8:37 PM No comments: