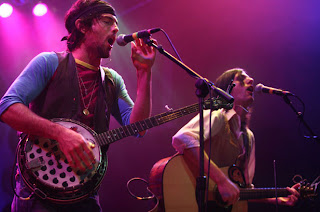 Rumors of a new "aggressive" Avett Brothers were greatly exaggerated.

Last night at the intimate Sunset Cove amphitheater under unexpected clear skies, The Avett Brothers opened their 2012 tour in one of the few outdoor arenas the boys will being seeing during the next several months.
A new album, under the long-distance tutelage of Music Buddha Rick Rubin, is due at any minute, but no date has been set.  The new songs, in particular "The Once and Future Carpenter,"  adds to the boys' quality repertoire.
However, there seems little evidence of a harder sound from Rubin's influence other than a heavier bass and lower harmonies on some of the new songs.  The Brothers have successfully melded folk, pop punk and Americana into an entertaining formula and, at last night's show, the band displayed why their are becoming a touring favorite.  There was plenty of energy (almost to the point of perkiness) and communal sing alongs for the faithful.
But a My Morning Jacket or R.E.M-shift along the rock slide rule is not in the making.  Maybe the album is different.
Still, a good time was had by all.  They are nice boys and are quite likable.
Posted by marty at 4:24 PM 1 comment: