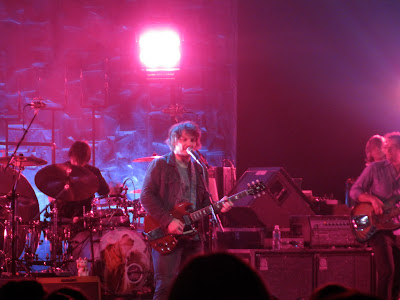 by marty
Halfway through the opening set of the opening date of its 2010 tour, frontman Jeff Tweedy gleefully declared it, "Wilco Gone Wild" and threw his head back with a laugh.
Imagining the laid-back, and often solemn, indie music godfathers at some Spring Break bacchanal is fairly ridiculous, especially for the 42-year-old singer and father of two boys. Not that the middle-aged, Chicago-based band is stuck in its ways. In fact, it is the opposite.
During its nearly 3-hour, 30 song set last night at the Jackie Gleason Theater, Wilco re-imagined many of their hit songs, ranging from a stripped down bluesy version of "Kamera" to a fusion frenzy on "Pot Kettle Black." For this scraggly country group turned indie rock band, Tweedy continues to push his bandmates forward to experiment in creating new and exciting sounds. The addition of true Guitar Hero Nels Cline to the band has put a razor's edge to Tweedy's musical explorations. Clines' solo on "Impossible Germany" was one of the show's highlights.
The enigmatic Tweedy was loose and playful. He brought a pre-teen up from the crowd to sing a couple of versus of Woody Guthrie's "California Stars." In the second half of the show, Tweedy did an amusing Carnac the Magnificent routine to introduce song requests from the sold out Miami Beach crowd. The lucky audience members were rewarded with a free meal at a nearby sushi restaurant.
The second half of the show started with an acoustic set where the band sat together surrounded by old-fashioned floor lamps - giving off a living room jam session vibe. But instead of playing the easier, long-winded, jam style of music, the band adheres to a jazz aesthetic, where improvisation and the silence between the notes are valued over the grandstanding solo. The interplay of the musicians and the melodies all through the night elevated the event from a great concert to something magical.
The "Evening With Wilco" tour continues for the next three weeks before it heads overseas. Better see your friendly, neighborhood scalper as the tour is sold out.
Setlist:
Price is Right theme music
1. Wilco (The Song)
2. Bull Black Nova
3. You Are My Face
4. I Am Trying To Break Your Heart
5. One Wing
6. Shot In The Arm
7. At Least That's What You Said
8. Pot Kettle Black
9. Deeper Down
10. Impossible Germany
11. California Stars
12. Either Way
13. I'll Fight
14. Handshake Drugs
15. You Never Know
Break
16. Spiders (Acoustic)
17. What's The World Got In Store (Acoustic)
18. Kamera (Acoustic)
19. Hesitating Beauty (Acoustic)
20. Sky Blue Sky (Acoustic)
21. Casino Queen (Acoustic)
22. Outta Mind (Outta Sight) (Acoustic)
23. Misunderstood
24. Heavy Metal Drummer
25. Jesus, Etc.
26. Hate It Here
27. Walken
28. I'm The Man Who Loves You
29. Monday
Encore
30. Thank You Friends (Big Star cover)
“California Stars” by Billy Bragg and Wilco (mp3)(iTunes)(Amazon)
Posted by marty at 6:39 PM 2 comments:

The Whigs Blow Through The Labels 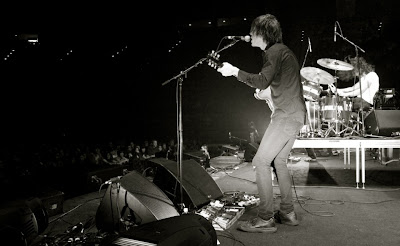 By marty
Mimicking the ever-expanding 'net, musical labels (not record labels) also promulgate at a bunny-rate forcing musicians to quickly declare their party. These labels, a blunt instrument wielded by critics and musicians alike, now mean little more than a simple column on your iTunes spreadsheet.
Indie rock, Americana, college rock, alternative, freak folk, electronic, arena rock - these labels can all apply to the Athens, Georgia trio and AF favorites, The Whigs. But none of them fully apply. The Whigs blow through these labels.
In their latest effort, In The Dark, The Whigs simply rock.
These labels are just adjectives that frontman Parker Gispert uses to create its impressive wall of guitar and bass. Although Gispert's vocals and lyrics provide the heft of The Whig's appeal, it is the driving rhythm section of Julian Dorio and Timothy Deaux that allow the band to see the world.
Written while supporting the Kings of Leon on tour, the influence of the Kings can be felt throughout the album along with nods to other indie heros My Morning Jacket, The Strokes and Fleet Foxes and HOFers REM and U2. However, make no mistake, there is something interesting here - something more than just another college band.
This album won't set the boys up to those other arena headliners, but it takes them several steps closer that acclaim.

Email ThisBlogThis!Share to TwitterShare to FacebookShare to Pinterest
Labels: Fleet Foxes, My Morning Jacket, REM, The Strokes, The Whigs, U2

Welcome To The World Of Plastic Beach

By Ian Minor
The fictional members of Gorillaz are in a bad state, bassist Murdoc has gone insane and dragged singer 2D to a island made of trash. Guitarist Noodle is missing with a robot taking her place and Russell the drummer was last seen jumping off a pier. Obviously not the best conditions to make a album on. Luckily the real brains, Damon Albarn, is doing great and after reuniting Blur and writing an Opera, he’s ready for some monkey business.

The album is heavily inspired by 80s pop, with a whole bunch of synths, which is quite a departure from the world feeling of Demon Days. It’s most notable in the track "On Melancholy Hill," which I could see as one of those weird 80’s music videos. There’s also a lot of rap on this album. Mos Def and De La Soul are both great in "Stylo" and "Superfast Jellyfish" respectively. "Superfast" is one of my favorites, and it’s heading to be the the hit of the album. With it’s bizarre sounds and great lyrics (the opening line “It comes with a toy, I like that” is already becoming a meme) sets it up to be the "Feel Good, Inc" of the album.

While the rappers do great, Lou Reed really shines through as the high point with his great song “Some Kind Of Nature” probably the most green-friendly song on the album, yet it still keeps with the offbeat nature that is Gorillaz. Lou Reed’s voice is hypnotizing and you can’t help bobbing your head to the keyboards in the background.

It’s a shame they wasted two great guests, Mark E. Smith gives a few mumbled growls that somewhat resemble human speech on "Glitter Freeze." Snoop Dogg intros the album with some slurred rhymes, but I really don’t blame Damon for that, it’s more that Snoop has not been sober since his first album came out. Rap song "White Flag" suffers from bad editing, barely transitioning from the first part (The Lebanese National Orchestra) to the fast rhymes of Kano and Bashy. It could have been a great track but it just trips in it’s current form.

Is Plastic Beach the best Gorillaz album? No, but it really doesn’t matter, Plastic Beach has enough great songs to carry the somewhat lacking ones. It doesn’t hit you hard with rock like the last albums did, but really it didn’t have to. This is perfect lounging music and in these stressful times, maybe we need an album to just chill out to.

Lips, Weezer and the Top! 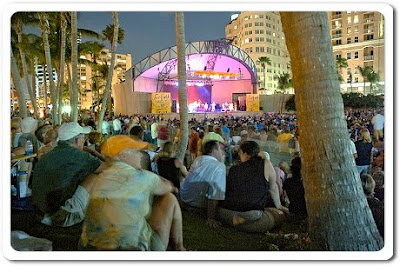 By marty
Best. SunFest. Lineup. ........ in quite awhile.
Perhaps not the best lineup is the
View Larger Map">West Palm Beach festival's 28-year history, but it is a damn good one.
The Flaming Lips, Weezer, ZZ Top, Ben Harper, Patti LaBelle, B-52s, Damian Marley and Charlie freakin' Daniels. Maybe because of the dearth of acts venturing to South Florida lately, but I am pretty stoked about my hometown festival, set for April 28 to May 2.
In recent years, the family-oriented festival tended to select its lineups down the middle of the road. More than a couple of locals have joked about annually seeing Steve Miller and Spyro Gyra at SunFest. Not of lot of variety and not much risk, outside an experiment of two. Worthy of a day or two of attendance.
There is some juice with this year's lineup. Some of the acts are getting a little long in the tooth, but this is something to get excited about - time to start mapping out your days.
Weezer opens the festival Wednesday, April 28th, with the third year of festival's New Music Night, which has featured some solid, up-and-coming acts such as After Hours favorites The Whigs. This year's New Music lineup has not been named yet, so you can still add your suggestions.
The Flaming Lips and ZZ Top will play at opposite ends of the festival Thursday night at roughly the same time and that sucks. Patti LaBelle will rule on Friday. The weekend is all over the place musically. Better to pull up a chair, catch some shade and enjoy.
That's worth getting excited about.
2010 SunFest Lineup
Wed, April 28
Weezer
New Music Night

Sun, May 2
Ben Harper and the Relentless7
The B -52's
Five For Fighting
Damian Marley
Nas
Flogging Molly
Marcus Miller

“Pork And Beans” by Weezer (mp3)(iTunes)(Amazon)