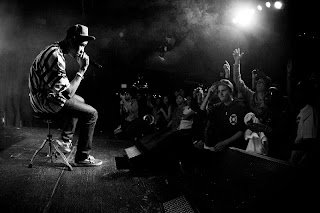 Right off the bat I'm going to say that Goblin has some of the most shocking lyrics ever put on a major label's CD, is a long trip into a dark psyche that part of you wants to escape and finally is one of the best rap albums in recent years.
Tyler, the Creator is seen by some as the savior as hip hop, and by just as many as a destroyer of values and moral codes. Music and controversy has been married for long back when people called rock "the devil's music." The one I remember most is Eminem, the rapper who gladly scared middle America with his dark lyrics. Eminem's influence is like a stamp on the album, felt from the rape/murder fantasy lyrics of "Tron Cat" to the various alter ego's Tyler has. The alter ego's, known as Wolf Haley, Tyler and Dr. TC, are the focus of the album. Not simply okay with keeping his alter ego's to their own songs they begin to invade other songs slowly taking over the (mostly) sane Tyler until he reaches a breaking point that leaves him a wreck but with the possibility of being saved from himself.
If you only buy one song off this album get Yonkers, which has gotten over 8 million hits on YouTube. Filled with great beats and clever lyrics it grabs you from the beginning with it's proclamation "I'm a f**king walking paradox, no I'm not." It's a perfect little slice of the insanity that has turned Tyler into a cult success. The real surprises are the more slow songs that Tyler is surprisingly good at "Her" tells the tale of Tyler being in love with a girl who complains to him about her boyfriends to him but still stays with them. It's a weirdly sweet song, that reveals that Tyler may not be the psycho he pretends he is. On the other side is "She" that while sounding like a John Legend/Kanye West team up, tells the dark story of Tyler spying on a girl through her blinds and escalating to murder and rape, in that order. The hook on this one is especially nice courtesy of Frank Ocean (who I also heartily recommend).
"Tron Cat" is probably the most shocking song on the album and it where Wolf begins to invade the song and Tyler loses contact with himself. The slow piano under the beat only fleshes out the horrifying lyrics and even Tyler seems shocked by what he's said. Golden in which Tyler manages to bring himself if only for a moment of light is a great way to end the album with some actually touching lyrics. It becomes clear that Tyler is no more then a scared teen who plays the psycho card for attention. Rather then feeling tricked, you feel pity for him and root for the guy who killed someone last track. It's weird and it somehow works.
When the album fails though, it fails hard, the opening and title track "Goblin" is subpar and it doesn't help that in the lyrics Tyler reminds us of the much better Bastard intro. The track "Radical" has been a hit at live shows and it should probably stay there, meant to incite mosh pits it just kinda sit there on the album. "B***ch S**k D**k" (my that's a lot of asterisks) is supposed to be a parody of bad rap, but lacks the fun energy of Tina from Bastard and is just bad rap instead of a parody. "Window" is okay, but it seems to be more about Tyler showing off his friends then making good music. Nothing wrong with that, but eight minutes of that can get grating.
Goblin is already being talked by some as that album. The one's that played by 21st anarchists as they burn down a school. However I think Tyler deserves a critical listening by us blogging hipsters with our flannel and our suave mustaches. That's because if you actually take some time to scratch off the grime there's gold in these hills.
Posted by Ian M. at 1:53 AM 1 comment: 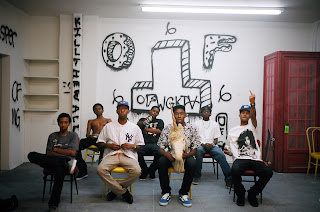 If you read any music blog, magazine, newspaper or flyer you've probably heard about Odd Future Wolf Gang Kill Them All. A collection of rappers, beat makers, producer and even a RnB singer. They've taken the indie world by storm with Pitchfork loving them and appearing on the covers of several big magazines. They've appeared on Jimmy Fallon, got a record deal and there's talk of a TV show. It's another story of a small group getting very big, very fast. We've seen it countless times in the music business. The thing that makes Odd Future different though is that they have attained this level of fame without selling a single album.
The group looks more like a group of skaters hanging out in a parking lot then superstars, mostly because that's what they are. The majority under drinking age their youngest, Earl, being 15 at the time he made his first and only album, they bring a mix of over the top excitement and awkward shyness.
Odd Future has released several mixtapes all for free on their Tumblr. The mixtapes quality range from Hodgy Beats' so-so Dena Tape to Tyler the Creator's amazing Bastard. Over all twelve mixtapes were made available for free over a two year period. Even groups like Wu-Tang have trouble getting that many albums out. It's a stroke of marketing genius though, anyone who hears about Odd Future can become a fan in a few easy clicks.
The music industry isn't all about the music though, from day one each member has updated their fans on Twitter, Tumblr and a multitude of silly youtube videos that not only keep them connected, but help them keep their fans attentions. Odd Future fans will stay up all night checking tweets and posts just for a new photo, new song or even a new album that gets dropped without any warning.
Tyler the Creator's new album Goblin comes out May 10th and as his first pay album and among a leak of the full album the odds are stacked against him. It still seems to see if the fanbase they've created, mostly made of internet savvy teens, will back him up now that it's pay to play.
Posted by Ian M. at 2:48 PM 1 comment: