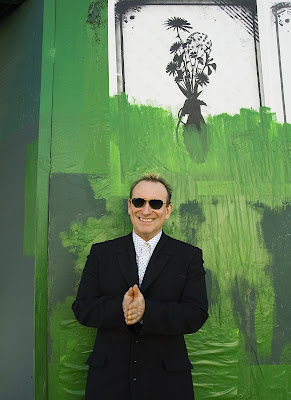 Colin Hay is a charming bloke.
The former Men At Work frontman and "Scrubs" favorite continued building on his slow and steady post-MTV solo career with an entertaining 90 minute show Saturday night at Palm Beach County's newest venue, The Borland Center.  Hay wrapped his literate ballads and acoustic versions of his 80's hits with a steady and funny recounting of his 30+ year career.  Nearly a third of the 90-minute show was Hay's hilarious commentary.
Some of the revelations:
Perhaps the main revelation and the overriding theme of the evening was Hay's 1991 sacking by MCA records. He spoke of it twice.  When he wasn't enthralling the crowd with humorous tales of his post-stardom life, he performed a strong selection of his well-crafted songs filled with his brand of cheeky melancholia
During the encore, Hay spoke of his desire to return to a larger stage of stardom.  It was a perfect set-up final song, "Waiting for My Real Life to Begin" - a song about the longing for the life we want to live.  It appears that Hay is well on the way to reaching this life. 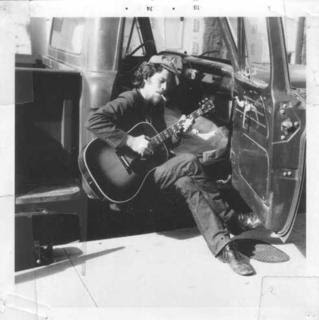 The good folks at Aquarium Drunkard posted a 1974 radio interview and performance by After Hours deity Tom Waits. The interview, by the late Howard Larman on the classic Folkscene show on Los Angeles' KPFK, finds Waits coming off tour opening for Frank Zappa and before the release of his second album, "The Heart of Saturday Night."
A mere 24-year-old, Waits didn't have his iconic gravelly-voice nor any of the experimental orchestrations of his later work. The interview and performance is a glimpse into Waits' early career, as he was searching to find type of music he wanted to make.
At the time, Waits was developing his bohemian hipster persona. He also was exploring the Spoken Word wing of Bohemia. Jack Kerouac and Charles Bukowski are cited as heroes and influences of his work. The two writers impact on Waits is immediate. Listen to the spoken rap of Waits' "Diamonds on My Windshield" below along with recordings from Kerouac and and Bukowski. You would swear you were at the best poetry night ever at the best Village jazz club.
Snap. Snap. Snap. Daddy-O.
Download the whole interview and performance here.

“Diamonds on My Windshield (live)” by Tom Waits (mp3)

“From The Dept. Of English” by Charles Bukowski (mp3)

The Pogues in Florida 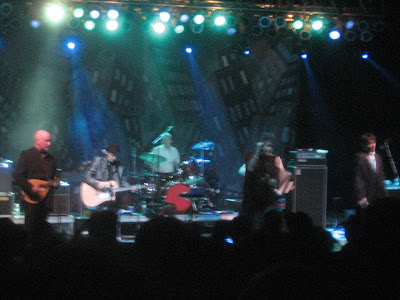 With The Pogues, who gave their only Florida performance Saturday night at the Pompano Beach Amphitheater, there is always a bit a magic to be found amidst the spilled beer and cigarette butts.
In years past, that magic grew out of the boisterous and intoxicating mix of Irish folk music and beer-spitting punk. More often than not, that allure comes from the misty brilliance of the Pogues' frontman, Shane McGowan.
However, to talk about The Pogues, you have to get past McGowan's alcoholism. Despite the clear record of his decline, the sight of McGowan's stumble onto stage was still shocking. Carrying a drink in one hand and a lit cigarette in the other, McGowan, using a wide gait, walked up the mic and shouted something very unintelligible. The crowd responded with gusto. McGowan looked and acted like one of those wild-eyed, old men harassing the tourists along Fort Lauderdale's Strip, which is just a stone's throw a way from his performance. He appeared at least a decade older than his 51 years.
But is was quickly evident that McGowan is embraced by his fans and bandmates as the affable, old soul he is. My wife wondered if the band should be known as "Shane McGowan and the Enablers." It was kinda funny, kinda cynical and kinda true.
After getting over the initial shock of McGowan's condition, it was easy to see why the Pogues drew fans from all over the state. The band was originally scheduled for the dearly departed Langerado festival in Miami. After the festival was cancelled, they booked a replacement gig at the Pompano Amphitheater. However, the publicity was late-coming and that is the probable reason for the half-filled amphitheater.
The band, which was tight and exceptional, played through an hour and 45 minute set, featuring many of the songs from the band's classic "Rum, Sodomy and the Lash." On songs like "Dirty Old Town," McGowan would pour himself into that gritty ballad - spitting out the lines about love in a dying town.
It was on "A Rainy Night In Soho" that McGowan found that magic. An older man singing a love song written nearly 25 years ago, drawing out emotions that were never evident in the first recording. When McGowan's ends the beautiful song with the following lines, he transcended the place and time and disease.
Now the song is nearly over
We may never find out what it means
Still there's a light I hold before me
You're the measure of my dreams
The measure of my dreams
With that, the beauty and tragedy of Shane McGowan rose into the warm, cloudless Florida night.

“A Rainy Night In Soho” by The Pogues (mp3)(iTunes)(Amazon)

Email ThisBlogThis!Share to TwitterShare to FacebookShare to Pinterest
Labels: Shane McGowan, The Pogues 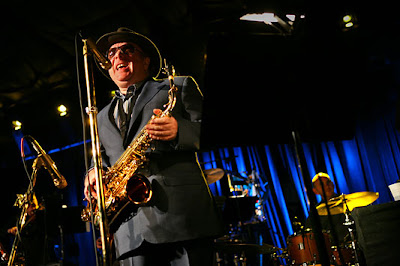 By Duncan Strauss
Over the years, I've been fortunate--enormously fortunate--to have seen countless Van Morrison concerts. Oh, sure, I probably could count them. We're not talking hundreds of shows, but we are talking dozens.

And the first one I wrote about took place some 30 years ago on the UC Davis campus, where I was ostensibly a student, and reviewing the Van Morrison concert at Freeborn Hall for the school newspaper.

Three decades later, I'd say that perhaps the most memorable aspect of the evening occurred just before the show started, when a woman working for the concert's promoter, Bill Graham Presents-- the whip-smart and wonderfully-named Queenie Taylor, who later became a major honcho in the Graham organization--sidled up to me and explained that I was in Van's sight line, and if he saw me taking notes, he might well storm off stage.

The fact that a no-nothing college kid scribbling in a reporter's notebook had the potential to short-circuit the concert provided quite a jarring first glimpse into just how artistically skittish the mercurial Morrison could be. Still, it was one helluva show (and it proceeded without incident).

In the ensuing years, there were lots of shows, lots of bands, large and small--Van sharing the stage with such truly stellar musicians as Georgie Fame, Pee-Wee Ellis, Lonnie Donegan, Linda Gail Lewis, one year sharing a bill with Bob Dylan and Joni Mitchell...

But I've never seen Morrison like I saw him in New York Friday, Feb. 27 at Madison Square Garden's Wamu Theatre, rendering "Astral Weeks"--it was a stunning, soaring performance (I believe he transcended, to paraphrase Van) that seemed truly singular for no less than three reasons:

(1) Improbably, his voice seems better than ever
(2) He seemed to be having fun, at times was downright playful and funny. I know: Van Morrison!?!?!
(3) He was backed by a 14-piece magnificent band--that he never introduced! I can't remember the last Van Morrison concert where he failed to at least briefly introduce each musician sharing the stage.

Let's take them in reverse order. I have to believe neglecting to introduce the band was wholly unintentional, an oversight not entirely unconnected to some onstage jitters here and there, and a few more tech-oriented things that didn't go his way. (More on that in a moment.)

Still, when it comes to these musicians, incredibly accomplished and adaptable--often on the fly, with a quick Van hand signal or nod--it should be noted that their ranks did include players from the original, 1968 "Astral Weeks" sessions (but just guitarist Jay Berliner, apart from Van), and most but not quite all of the musicians featured on "Astral Weeks Live At The Hollywood Bowl," the just-released concert disc documenting the two "Astral Weeks"-centric shows Van delivered at that outdoor venue in October.

Which means stand-up bassist David Hayes, violinist Tony Fitzgibbon and flutist/saxaphonist Richie Buckley, among many others, were all on hand to help re-create "Astral Weeks"--and freshly create musical magic that traversed that set and the preceding hourlong set that sampled the sprawling Morrison catalog.

If it was somewhat out of character for Van not to give the band props, it was even more so--delightfully so--to find Van in such good humor. He seemed to be enjoying himself to the point of occasional giddiness.

As a reflection of this, when things went awry a coupla times on the technical front, where the Van of yesterday (and, perhaps, tomorrow) would've surely soured, if not bailed out of the performance, at least figuratively, it seemed to tickle him. Or at least, not rankle him.

For instance, at one point about midway through the first set, during his spirited reading of "Who Drove The Red Sports Car?," his cord popped out of the microphone, just before he unleashed an otherworldly flight of vocal fancy.

Realizing what had happened, he chuckled and said "I have to do that again, right?" And did. Not the same way--this is Van Morrison, after all--but no less astonishing.

Later, to close the first set--not unlike the way the "Astral Weeks Live" CD concludes (and he's certainly done it in the past)--Van engaged in a call-and-response passage with saxophonist Buckley in which Morrison would utter a word or phrase, and Buckley would instantly repeat it. Instantly.

It was a thrilling exercise, and entertaining when it reached a point where Van was clearly trying to trip up Buckley with a lightening-fast delivery, dissolving into laughter at one point. Yeah, I'm still talking about Van.

And then, Morrison started to make his way to the side of the stage, singing as he made his exit--but the drama of the moment was thwarted a bit because well before he'd disappeared backstage, his microphone cord wouldn't stretch any further.

Again, instead of the reasonably expected Vantrum, he shrugged, said "the cord's not long enough," dropped the mic and strolled off. It should probably be noted that the songs before this set-closer included his version of Pink Floyd's "Comfortably Numb," and a mini-medley of "Mystic Eyes" and "Gloria." A wonderful mix of the surprising and semi-expected, or hoped-for, potently performed.

There was virtually no horsing, as we call it in our house, during the second set--in this case, Van opted to do "Astral Weeks" in the original album sequence, which hasn't been the case in the Hollywood Bowl shows and some of the ensuing New York City concerts.

But with the more sober-minded stance, Van seemed both truly transported and seeking a way to transport the band--and the audience--to new musical, emotional and spiritual contours of this eminently familiar material. Boy, it worked, and in no small measure because--defying logic, physiology and who-knows-what-else--his voice seemed at least as robust, soulful and strong as ever.

Really doesn't make any sense. The guy's 63. Just part of the Morrison Magic, I guess. In 2009, directly tied to re-exploring "Astral Weeks," Van seems to be somehow tapping a bottomless well of Morrison Magic.