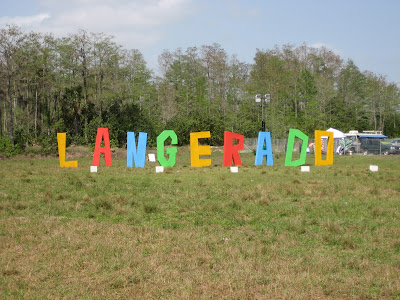 South Florida's beloved and beleaguered music festival, Langerado, is back.

Two years after the popular festival closed up shop, promoters announced that Langerado will re-appear this fall as a two-day festival.  The October 8th & 9th musical festival will return to the location of its best days at Markham Park in Sunrise, Florida.

Promoters are promising a "diverse collection of artists from indie rock to electronica to modern roots" encompassing 22 acts.  The first line-up announcement is set for June 1st.  Special "on faith" tickets are $75 for two-days of undetermined music.  After the acts are announced, the advanced tickets go up to a throat-clearing $150 for the two-day festival.  This will be the first autumn dates for the festival, which usually ran during the March spring breaks.

The festival left Markham Park after the 2007 event when Broward County received numerous complaints about lax drug law enforcement at the show.  The 2008 event was moved to the remote Seminole Big Cypress Indian Reservation in the Everglades. The 2009 festival was planned for downtown Miami, but was quickly cancelled due to poor ticket sales.

After Hours HQ is cautiously optimistic and thinking about getting new concert chairs.

Email ThisBlogThis!Share to TwitterShare to FacebookShare to Pinterest
Labels: Langerado

Band You Should Know: Sam Friend

In an age where music has been whittled down to invisible bits and bytes, Miami singer-songwriter Sam Friend builds his pop-infused Americana with the skill of a master carpenter.


Crafting captivating songs about love and loss, Friend uses a variety of instruments from classical strings to a mandolin. His voice is reminiscent of early Conor Oberst and James Mercer of the Shins with a touch of Thom Yorke.  Friend is bound to be a player in the anti-folk scene for years to come.


Friend will be performing Saturday, April 12th at the Art Walk in the cooler-than-cool Miami Design District.  Friend, who is currently recording in NYC, will be performing at The Garden Lounge, 191-A NE 40th Street, Miami. Music starts at 7:30 p.m.


The Miami/Dade native took some time from recording to discuss with After Hours his new album, finding the right sounds and the liberal return policy at Radio Shack.


AFTER HOURS: I guess one of the obvious questions is, “How does a University of Miami jazz student become an indie folkster?”
SAM FRIEND: Simplest answer is I always basically was, way before I knew about the term. And still am, an indie folkster. I’m totally cool with that. Jazz was the thing that you did during school hours. I was never one of those people who placed jazz above all music. It’s super hard on all levels, no question, but there have been great players in all genres. That doesn’t necessarily mean they’re any good. I connect with music at the source. And that has little to do with perfection and execution. That stuff can help, of course. Oh man though, jazz can say so much when it’s working.
AH: You open your latest album, Lady Madly, with the "environmental" recording of a street scene and end the album with a recording of you singing in what sounds like a separate room.  What is the attraction for you of these non-traditional recordings?
SF: A lot of that’s the Seattle thing. There’s a real sense out there that music should be honest and gimmicks are transparent. There’s emphasis placed on finding time to let things develop at their natural pace, easing in. That and all those ambient infused moments on records I listened to growing up were a big influence. Especially on mindset and approach when giving Lady Madly her parenthesis. In retrospect, they act as a reminder that these songs came out of real things. Things like people reading this article right now even. I guess that be boring though, to hear someone reading, unless you’re John Cage. The beginning of Lady Madly is a reception outside the Henry Art Gallery at UW. One girl says, “I feel like she wants to.” That’s where it starts. For the finale, I bought a tape recorder at Radio Shack, walked home, recorded a live take in a bathroom, walked back to Radio Shack and returned the recorder.
AH: Your music welds together many different types of musical genres and beats. It is not unusual to hear a rock guitar riff, strings, and pop harmonies over an Americana stroll that gives a nod to a reggae beat.  Is this a conscious decision to expand the vocabulary of your music or is it an organic evolution?
SF: Mostly organic. Not to say I don’t think about what I’m doing. I’m a thinker. But the vast majority of what I write that makes it into my shows and on my records are ideas that happen when the thinking stops. Not on purpose, just fleeting creative energy that happens when it happens. And so if something works, it works. I don’t know how people write in one style all the time. My attention drifts. I like the idea of making songs that reflect an entire record in each song. Not in the way of changing things abruptly as to confuse, but to take the listener through various ideas without them noticing the shift until they’re already there.
AH: Growing up and living in Miami-Dade, does the exile nature of the residents (snowbirds, refugees, retirees and fortune-seekers) and the multiple cultures of the area influence your music?
SF: Sure. But not the way you might expect. As a young guy, I spent time in West Virginia, where my mother’s from. So that seed was planted early. And growing up in Miami, I felt an attraction to the idea of music that I couldn’t touch. Like British rock and American folk. It was difficult for me to identify with a lot of the Latin influences in music that are prevalent in the area, so I think it kind of intensified my connection to the music I was into. And it was hard to find at record stores, so that probably added to the allure. But I have to say, recently I’ve come around and learned to really get into all the unique convergences of cultures down here and the music that comes out of all the vibrancies.
AH: You have been recently recording in NYC, are you preparing a new album? EP? single?  With the continual flux of music business, how does an artist move forward in this uncertain environment for the music industry.
SF: I think that’s a good question. For me, it’s about putting myself in a position to continue creating. And this music industry allows that. I got into this game because I was moved by the power of music early on. And I felt a kinship with the people who made it. So far, I’ve been able to continue making music and continue learning how to do it. To answer your question, it’s going to be a document of style including songs I’ve been writing since my last release, and I’m calling it Spirit Mirror.
AH: What was the best show you saw last year?
SF: Chris Thile and Michael Daves at Rockwood Music Hall in New York City. Both these guys are the real deal. I had just got in from Chicago, and was playing the same venue days later. It wasn’t too cold yet, and Max Fish was still open. It was interesting to catch that rural associated sound in the most major of metropolises. The whole crowd was right there. The room’s energy really resonated to the rafters. I was buzzing.

Sam Friend - Part of the Show from Adam Fairholm on Vimeo. 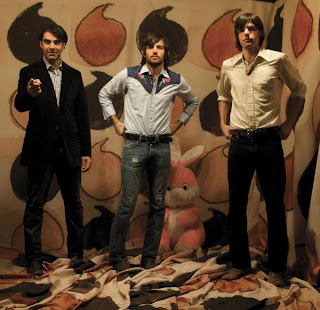 Rumors confirmed and so much more.

The Avett Brothers, Cee-Lo and MGMT (say what?) are the announced headliners for the 2011 SunFest in West Palm. The festival line-up has a little something for everyone - perhaps one "must see" and at least a couple "check outs" for the discerning music fan.  It is a worthy lineup.

Today announcement also marks the end of  New Music Night at SunFest.  This noble, but inconsistent, programming experiment brought several great, young bands through the area to the attention of few.  I'll classify it a success for the sole reason on providing the introduction to The Whigs.

More to come on the music as the festival approaches.  However, it should be noted that After Hours HQ is happy to see the return of Ziggy and is thinking that Gregg Allman's set may be something special.
Posted by marty at 8:07 PM No comments: