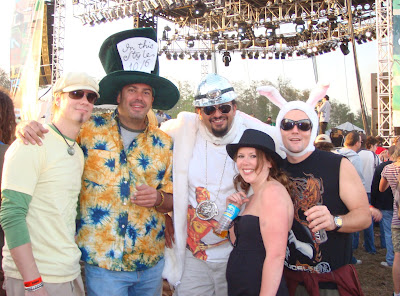 Langerado, the South Florida music festival that could, can no longer.
Today, the festival cancelled its 2009 festival due to poor ticket sales. After six years of steadily growing and adding more adventurous lineups, Langerado had planned for a better and larger show at downtown Miami's Bicentennial Park.
The lineup was to include Death Cab for Cutie, Snoop Dogg, Public Enemy, Modest Mouse, Broken Social Scene, Ryan Adams and the Cardinals, Girl Talk, Tortoise, Bad Brains, the Pogues, George Clinton & Parliament/Funkadelic, Tokyo Police Club, the Faint, Tricky, King Khan and the Shrines, Cloud Cult, Ra Ra Riot, DeVotchKa, Against Me!, Black Kids, the Gaslight Anthem, Cold War Kids, and Thievery Corporation.
It was a hell of a lineup.  The local promoters cited poor ticket sales combined with relocating to a new and larger venue as reasons for the cancellation. The loss of Langerado puts a ominous chill on the 2009 concert and festival season.  Although tour receipts were up 7 percent last year over 2007, this year is looking brutal.
Hopefully, the more-established festivals like Bonnaroo and Coachella do not suffer the same economic freefall as the up-and-coming Langerado.  Bonnaroo has recently announced that Bruce Springsteen and the reunited Phish will headline the June 11-14 festival. Coachella is featuring Paul McCartney, The Cure and Amy Winehouse at its April 17-19 festival in southern California.
Here's hoping for better economic news for these festivals.  If not, it will be a very long and not very fun year.
“The Sound of Settling (Acoustic)” by Death Cab for Cutie (mp3)(iTunes)(Amazon)
Posted by marty at 9:32 PM