In honor of AH contributor Ian's imminent departure to film school and a bevy of new adventures in the Second City, we present three offerings for his future film soundtracks. As we are in the business of opinions, also offered are suggested sequences to accompany these instrumentals or damn-near instrumentals.
“Torpedo” by Hawaii Mud Bombers (mp3)(iTunes)(Amazon)
Nothing sparks your indie cred like placing a Swedish surf punk group on your play list. In "Torpedo," the Hawaii Mud Bombers channel Dick Dale and provide the perfect getaway music.
“Knife Chase” by Tom Waits (mp3)(iTunes)(Amazon)
A little darker than the upbeat "Torpedo," "Knife Chase" by AH deity Tom Waits screams of grittiness, back alleys and too many late nights. Save this for your film noir.
“Mosquito” by the Mosquitos (mp3)(iTunes)(Amazon)
With this little indie rock/bossa nova, the NYC/Brazilian trio provides a quirky little ditty that evokes the seductive rhythms of summer. Or, if you are feeling a little Tarantino-ish, match this song up with a frightening mosquito attack in a classic horror style.
Have fun. Explore your art. Create big smiles.
Filmmaking is a chance to live many lifetimes.
Robert Altman
Posted by marty at 4:28 PM No comments: 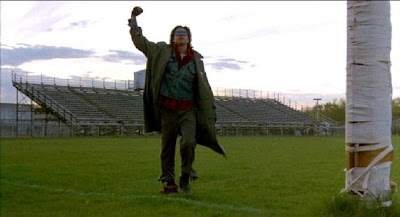 There are more than a couple bands, largely British bands, who should be saying a deep prayer of thanks to filmmaker John Hughes.
Hughes, the premier chronicler of 80s teenage angst, died this past week of a heart attack on the streets of New York. Not only did Hughes make some of the more memorable comedies of the 80s, he introduced scores of new bands to a bevy of midwestern teens. I know, I was one of them.
More than a few times did I head to the record shop immediately after staying for the soundtrack credits for the latest Hughes flick at the multiplex.
The closing scene of The Breakfast Club, where a not-so-convincing sensitive, tough guy Judd Nelson puts Molly Ringwald's earring in and throws his fist into the air, left an army of testosterone-fueled teenagers humming the movie's theme song. For the popular British band, it was their stateside break. The scene still soars.
“Don’t You (Forget About Me)” by Simple Minds (mp3)(iTunes)(Amazon)
In another finale, OMD was featured at the prom in Pretty in Pink (which was inspired by the Psychedelic Furs classic). As a result, the British bank Orchestral Manoeurvres in the Dark immediately became a staple for proms across the nation. Still, Duckie got hosed.
“If You Leave” by OMD (mp3)(iTunes)(Amazon)
In perhaps my favorite John Hughes film, Ferris Bueller's Day Off, Hughes give Matthew Broderick a break of a lifetime. In this classic school-skipping flick, there are numerous memorable tunes - remember Danke Schoen - but the obscure "March of the Swivelheads" by The Beat drove the film to its finale.
“March of the Swivelheads” by The Beat (mp3)