Reasons For Falling In Love With The Constellations? Let Me Count The Ways... 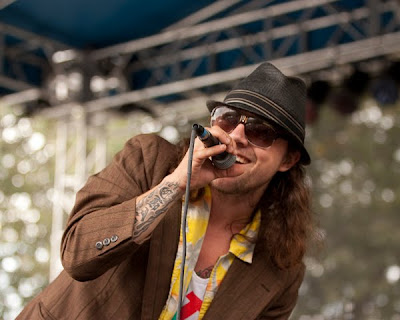 By Duncan Strauss
Apart from falling in love with a person, there are few experiences more thrilling and meaningful for a music fan than falling in love with a new band.
Of course, a chief component of this swooning jolt is the sense of discovery--Wow, I've never heard these guys before and I LOVE 'em!--a powerful feeling whether you're 12 or, let's say, 52. And, I'm guessing, older than that, regardless of whether that number ends in "2."
A case in point for me lately: Atlanta-based band The Constellations. Lemme set the scene. It's West Palm Beach, Florida, earlier this year -- it's April 28, when the local music fest (which, in the ensuing days, would offer the likes of Ben Harper, Rise Against, Patti Labelle, ZZ Top, B-52s and was slated to feature Flaming Lips, before illness forced their cancellation) SunFest was  presenting New Music Night, headlined by Weezer. 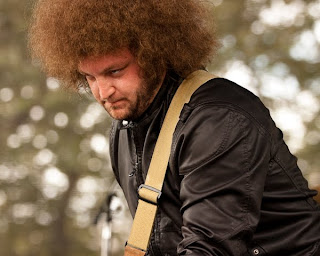 To be honest, and perhaps heretical, I didn't care much about Weezer, but I was excited to sample the new bands, a coupla of which -- Gringo Star (great name, no?), These United States -- I had heard, or at least, heard of. But otherwise it was, for me, a sumptuous new-band buffet. My response to the first few bands I saw was lukewarm, or worse, and then I took my place at the back of the grassy field facing the Tire Kingdom Stage (you heard me), where there were maybe a few dozen other concert-goers, as the Constellations eased into their set.

I was immediately intrigued by the funky, soulful racket the band was kicking up, struck that there were seven members--and amused that among this septet, there were  two back-up singers. I mean, that's a rock star gambit, a Sting move. But here's a new band that even most music aficionados haven't heard of, that can't be making any dough to speak of on the road -- still, they have not one, but two back-up singers. Hilarious. And interesting.


Not as interesting as the performance that unfolded.  It was rock, soul, R&B, hip-hop, funk -- and quickly added up to  way more than the sum of those parts. It was peppy, swinging, sexy, feisty, magnetic. It was messy, greasy, irresistible fun.

It was a raucous house party, yet it didn't take long to see that the host--in this case, lead singer Elijah Jones, was deftly controlling the chaos, the frontman equivalent of the guy who throws a giant bash, and while keeping the drinks and stories coming is also subtly surveying the scene to keep the tipsy gal across the living room from knocking over the antique lamp, or the pair of blotto, increasingly grumpy guys from throwing any punches 'til they step outside.

Indeed, Jones has charisma to burn, and while he projects an image of the whirling-dervish party animal, he also knows exactly what he's doing (if he's crazy, he's crazy like a fox), and more to the point  loves  what he's doing. Also, his manner suggests catholic tastes in music, and vast knowledge -- he probably has a better, broader music library than you or I do, combined.


But The Constellations is far from a one-man band, and as I became swept up in the magic carpet ride of their SunFest performance, it was because all the musicians on stage locked into a blissed-out whole, forming a huge beckoning finger, luring the listener into the fold.


Literally, in my case. As they galloped deeper into their set, I gradually moved from the back of the grassy area closer and closer to the stage--that's how mesmerized I was, and if they'd played any longer, I might well have climbed on stage with them.

Which would've been awkward. It doesn't appear they're looking to expand their ranks, but I thought afterwards they did remind me a bit of Edward Sharpe And The Magnetic Zeros, an even larger collective, though much as Sharpe & company seem to be a buzz band of the moment -- I'd say tapped into the zeitgeist, but I'd have no idea what that means -- I find The Constellations more soulful. And more fun.

As soon as I got home that night, I searched online for The Constellations music, learning a debut album, "Southern Gothic," was on the horizon--but downloaded the song that was available, "Felicia," a wonderfully funky number propelled in part by Jamie Gordon's spirited electric piano. I've since played "Felicia" a bunch of times on the Wednesday Sonic Detour on WMNF, and enthusiastically sung the band's praises on-air each time.

And "Southern Gothic" more than lives up to the expectations created by the live adventure: it offers much of that vigorous chaos and genre-traversing--this thing travels from Tom Waits (in the homage-more-than-cover "Step Right Up") to a guest turn by Cee-Lo, who's featured on "Love Is A Murder"--but is delivered with a firm, unifying hand by producer Ben H. Allen (Animal Collective, Gnarls Barkley).

Then, over Labor Day Weekend, my crush on the Constellations only deepened when I saw them at Bumbershoot, the Seattle music and arts festival celebrating it's 40th anniversary (I started going 19 years ago).  Semi-interesting coincidence: Edward Sharpe & The Magnetic Zeros were also there, performing about five hours after The Constellations.

This set was longer, bigger, more colorful--better. From launching the show with the hypnotic "Setback" (I suspect I won't be the first, nor last, to note that this song is a kindred spirit, sonically, with "Tomorrow Never Knows") The Constellations were a blast, whether churning out the extended Waitsian extravaganza, "Step Right Up," rendering a cover of "Let's Dance" brimming with as much percolating fun as any version I've seen Bowie himself perform (and highlighting that another not-so-secret Constellations weapon is Wes Hoffman, whose bass lines are as big as his 'fro, which is saying something) and nearing the finish line with a smokin' "Felicia." And even when their time was up, they squeezed in a quick cover of "I'm Waiting For My Man."

Jones was, once again, screwy-captivating, including between-song patter that ranged from first impressions of Seattle to noting that -- when he peeled off his jacket, revealing a hideous, mostly-yellow floral shirt --"I dress like a pedophile," and generally keeping things moving, as  he kept moving.

And he moves with something of a swagger, mild enough so it's not off-putting, but pronounced enough so it underscores everything else: Elijah Jones was born to front a band--not just any band, mind you, but a band with as much horsepower, and as many gears (and as many members!) as The Constellations.

Which brings us, finally, to a couple of key questions: Are The Constellations the most original force to arrive on the national music scene? No, although the way they encompass and combine genres, and sometimes styles from different eras, is enormously refreshing -- few bands, old or new, can touch them when it comes to chemistry, and alchemy.
Question two: can they change the world? Again, no, but for an hour or so -- listening to "Southern Gothic" or, especially, catching them live -- they can change  you, making you feel carefree, transported and deliriously happy. And, that's why I fell in love with The Constellations.

Email ThisBlogThis!Share to TwitterShare to FacebookShare to Pinterest
Labels: The Constellations

Listening for The Tin Hearts 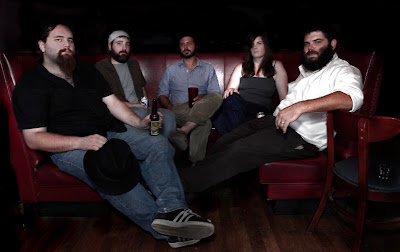 There is something magical about the mixture of folk, country and blues.   Something hardscrabble, dusty and soulful.  Call it Americana or alt.country or whatever.  It is the music of my home, my youth and my continued passion.
Not surprising, I count My Morning Jacket, The Felice Brothers and Wilco as guideposts for my fervor.  Mix in some Blitzen Trapper, Band of Horses, Hayes Carll and some Ryan Adams and you have a well-rounded playlist of modern Americana.
It is time to add another to the list.  The Tin Hearts, based out of Columbus, Ohio, is a welcome addition to the club.
The tight, five-piece band plays honest, hard-working music that will keep the honky tonk lights burning until dawn. However, it is Matthew Sullivan's gritty vocals and harmonica work that make the band stand out.  Like the aforementioned bands, The Tin Hearts possess a rollicking honesty that will take them far.
After releasing their self-titled debut album last year, The Tin Hearts will release their second album, "No Good Deed," on Singing Moon Records on September 10th.  I can not wait to hear more from this up-and-coming band of musicians.
“Times Like These” by The Tin Hearts (mp3)(iTunes)(Amazon) 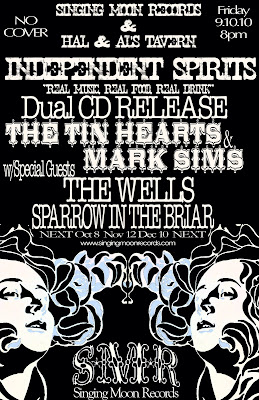 The NSFW Song of The Summer Mania Continues


A great version by AH hero, Tristan Clopet, in the latest installment of his Living Room Series.


And, of course, the official video drops.

You can keep a good song down.
Posted by marty at 8:16 PM No comments: