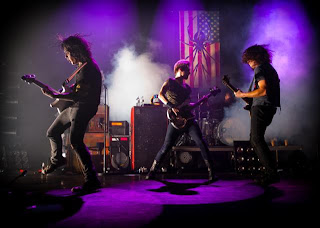 My Chemical Romance has gotten a bad rap. The first single off their last album "The Black Parade" has been mocked endlessly, they've been lumped into the genre of emo which they are none to happy with and they've been going through drummers like Grateful Dead going through keyboardists. So with all these image problems My Chemical Romance has thought long and hard and come up with an answer to all of it.
"F them all."
Their new album Danger Days is brash, loud and unreserved, it's straight up punk from an unlikely source. Masquerading as a radio broadcast from the wasteland as a energetic DJ gives cryptic comments and fortune cookie type phrases like "louder then god's revolver and twice as shiny." It's kinda weird, but it sets the stage for the album great.
The album is a collection of hits and misses. Songs like "Na Na Na" really set the tone for the album, somewhat anarchistic, somewhat silly, and absolutely no feeling sorry for yourself. Any resemblance of deep thought is replaced by pure fun, which I think is a wise move. After three albums of trying to be deep and only succeeding once these guys are much better when they let loose. Another highlight is "Party Poison" a great rock song that I can see taking radio by storm and I'm sure you'll be seeing it in a whole lot of movie trailers for years to come. It just has an immediately recognizable sound that you keep going back too.
"SING" is the ballad on this album and it's reminiscent of the rock ballads of the 80's and I'm sure it'll feel right at home at the amphitheatres the band usually plays in. "Planatary (GO)" is probably my favorite song on the album, from the slow, paranoia inducing opening to the heavy hitting chorus it's just a great song and one I hope isn't ignored.
Like I said there's misses too, "S/C/A/R/E/C/R/O/W" will probably win my award for most skipped song of the year. It's boring, meandering and it can't decide what it wants to be. In fact the three song after it suffer from just not being too memorable, you may enjoy them while listening to them, but after that you'll probably never hear them again. They're not bad, they just bring nothing new to the table.
Despite the misses, this album is great. It's not going down in history as revolutionary or as a look into the human soul. It'll be remembered as a album that rocks hard and that's good enough for me.
Second Opinion
"Danger Days" is the bastard child of an 80s hair band and a 90s pop/punk band (i.e. Blink 182). It is good-time "aggressive rock." High harmonies and grinding guitars. The album's high points rocked a car stereo of a sunny day. The rest was forgettable.
“Planetary (GO!) by My chemical Romance (mp3)(iTunes)(Amazon)
Posted by Ian M. at 6:59 PM

Email ThisBlogThis!Share to TwitterShare to FacebookShare to Pinterest
Labels: my chemical romance