"Corn Flakes": Food For Thought About Rock Criticism And The Music's Preeminent Figures 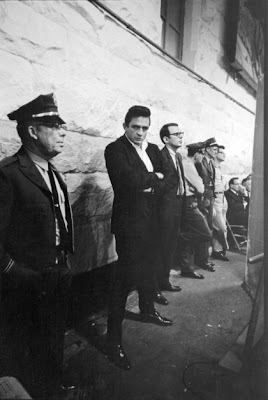 "Corn Flakes With John Lennon And Other Tales From A Rock 'N' Roll Life," the new book by Robert Hilburn -- who spent more than 35 years at the Los Angeles Times, most of those as chief pop music critic -- manages to at once be a breezy, fun, fascinating read while prompting me to view rock criticism in a whole new light.
Which is really saying something, considering I dispensed rock criticism myself for many years, including a decade-long stint in the 80s at The Times under Hilburn's auspices. But I'm getting ahead of myself.

"Corn Flakes" is nominally a memoir. We learn a bit about his formative years (and his budding passion for music), we learn about a bit about his family -- fleeting mentions of his kids, brief references to the obsession with work and the attendant demands of being out nightly and frequent travel that helped crumple his first marriage -- and we learn a bit about how a non-smoking teetotaler functioned in a world often partly defined by personal excess and self-destruction.

But you only have to travel a handful of pages into this book before it becomes apparent Bob Hilburn isn't really interested in talking about Bob Hilburn. But he does want to talk, expansively, about another Bob -- Dylan.

From the way he scribbled out a setlist in Israel that Dylan used in a concert there, to the way he had often rejected Hilburn's interview requests, to the way -- in the twilight of Hilburn's career at The Times--he agreed to sit for extensive interviews in 2003 about his songwriting process across the arc of his career, a sprawling and revealing piece called "legendary" by Mojo magazine, and the initial installment in a wildly ambitious songwriting series that, Hilburn notes, helped him win a Times award and his third Pulitzer nomination.

But Dylan represents just one of the preeminent pop music figures that forms the core of "Corn Flakes." It's chock full of wonderful stories about Elvis Presley, John Lennon, Johnny Cash (among the great photos included here is one of Cash at Folsom Prison in '68, standing next to Hilburn, who's clad in a dark business suit and tie), Stevie Wonder, Bruce Springsteen, U2, Michael Jackson, Kurt Cobain, Chuck D, Jack White, et al. 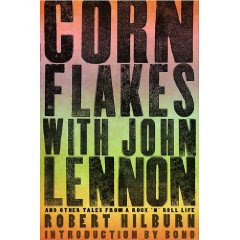 The book also offers a handful of nifty sidebar-like elements, like "My Rock 'N'' Roll Dinner Party Guest List," "Some Favorite Quotes," "Favorite Road Trips" and the like. It's an unusual book, by a writer-critic with an unusually long tenure at a publication, and unusual access to rock's most important, influential artists.
The book sports an introduction by Bono that makes it clear he admires, if not adores, Hilburn, including the phrase "He made us better." Both that introduction and various parts of Hilburn's narrative indicates there were numerous encounters with Bono/U2 over the years, starting with Bob's momentous review of the Irish band's L.A. concert debut that ran on the front page of The Times' Calendar section in March of 1981.

But it's equally clear that the interviews Hilburn conducted with Bono (and sometimes, his bandmates)--and the informal, sometimes off-the-record conversations--with the Irishman had the most profound impact, probably on Times readers, but certainly on Mr. Hewson and the rest of U2.

A notable example: In the wake of the explosive success of "The Joshua Tree," and the fervently mixed response to the "Rattle And Hum" film, Bono and Hilburn had breakfast and the singer mentioned a handful of projects he was contemplating, including a screenplay, a novel, some short stories and essays.

Hilburn viewed this as a red flag, fearing Bono ran the risk of spreading himself too thin at a pivotal career point, and unleashed some heavy ammo: He asked Bono how many great songs he'd written thus far -- and in the same breath, asked how many great songs Dylan, Cole Porter and Lennon had written. We see in a fe 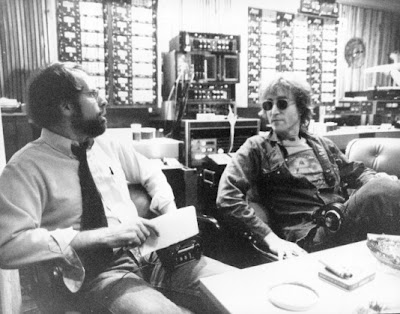 w places the impact of this tactic, including in Bono's intro, where he acknowledges feeling "chastened."

Which brings me back, finally, to the way "Corn Flakes" guided me to a reconfigured take on rock criticism. When people discuss a significant, truly influential critic -- whether that's in the realm of literature, film, music, theater, fine art, etc. -- that discussion typically revolves around that critic's reviews.

What made Pauline Kael, well, Pauline Kael were her reviews. Same goes for Kenneth Tynan. Or Michiko Kakutani. And in contrast to critiquing film or theater or books, in the world of pop music criticism, there are two components that might get reviewed: recordings and performance.
Interestingly, however, although Hilburn was an endlessly prolific critic, writing multiple album and concert reviews damn near every week for more than three decades, the impression that emerges from "Corn Flakes" is that healtered the music landscape, the singular craft of pop music criticism and, in some cases, the creative output of certain artists not by his reviews so much as by his interviews.

Meaning both the conversations themselves, and the resulting published pieces, even if those pieces could only capture a percentage of any given discussion (he retired from The Times before that paper had even an adequate much less stellar online presence).
You get the sense that artists enjoyed--and benefited from--both formal and informal conversations with Hilburn, whether it was someone as irrepressibly loquacious as Bono or as famously media-wary (and world weary) as Dylan. And we, the reader, benefited enormously from those exchanges, brimming as they were--and are in this book--with insights, revelations and great humor.

As another measure of Hilburn's conversational gifts, and winning personality, John Lennon often sought his company, inviting him to dinner and other social gatherings. (Some of those visits explain the "Corn Flakes" title--y 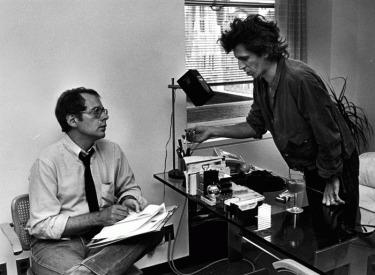 ou'll have to read the book!)

Hilburn's kindness, humility and generosity of spirit come through this book again and again. Not at all a surprise to me. In the late 70s, I was attending college at UC Davis, covering music for the school paper and freelancing for The Sacramento Bee and regional music magazines like BAM.

I sent Hilburn a small sampling of my writing, and to my utter shock and delight, a few weeks later, a short, encouraging note arrived from him, saying, in effect, that I was on the right track, and to keep at it.

About a year and half later, when I was nearing graduation, I sent him another batch of writing. Sure enough, I got a note back, this onealso brief, but huge in the way it changed my life: It said the reviews were "taut and convincing" and that I should be doing this writing for them-- for The L.A. Times -- and could be if I were living in Southern California.

Within a few months, I was living in Orange County, and writing for The Times, thanks to Bob Hilburn. I'd have corn flakes with him anytime.
Posted by marty at 3:21 PM

Email ThisBlogThis!Share to TwitterShare to FacebookShare to Pinterest
Labels: Bono, Robert Hilburn, U2