The Nightlight Who Watches Over You 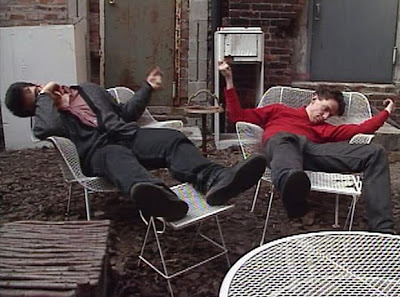 By Ian Minor
20 years ago an album came out that would later be called “a landmark release in the evolution from college rock to alternative.” The third release of rock group They Might Be Giants, Flood would give them their big hits and fame worldwide. It would also be the immortal and ever important first album for me.
It’s a little shocking that my first album came out a full two years before I was born. I first heard They Might Be Giants of a mix tape (remember those) that my uncle made. I believe the first song I heard was their mega hit Birdhouse in Your Soul. It’s hard to describe their impact they’ve had on me. It would be like describing the times before one learns to walk. There is no before TMBG, only after.
I do remember not understanding why their lyrics were so captivating, so compelling and heartfelt when they really said nothing. One lyric read “I came back as a bag of groceries accidently taken off the shelf before the date stamped on myself.” Trying to understand that is hard for a young adult like myself, so I imagine it broke my brain when I was twelve.
That’s why I think They Might Be Giants, they don’t have to worry about their message staying current. Because their is no message. Their music is timeless, which is helped that the two Johns have not aged since the mid-90s.
I went to a show of theirs not to long ago and it’s refreshing to see that no matter how giant they get, they’ll still joke and talk to the audience. True, they may be Grammy winners, but they’re not scared to bust out the sock puppets if they need to. Watching them preform one of the lesser known Flood songs, I was transported back in time, to a small club, where they had just released the album. Where they were just the musicians who had always been there for me, not stars, not one hit wonders, they were just my first band.
And it was pretty awesome.