Weezer's On An Island Having Fun 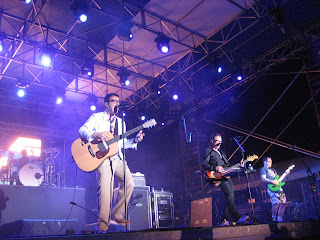 Weezer has always been seen as one of the best alternative rock groups. Whether you like the introspective Pinkerton or the rocking Raditude. they have a place in rock history that can't be denied. So with a reputation like that how can a live show compare?
As I sat in the media section, an are a that was new and scary to me, Weezer took the stage. I took a ton of photos before they kicked us out. Rivers Cuomo didn't come out for a while though, he knows how to play an audience. He's an excellent frontman and his nerdy exterior really deceives you as he jumps across the stage and onto speakers. He almost scared me a few times, I was worried I was watching their last show.
The highlight of the was "Say It Ain't So" which Rivers opened up by saying "I gotta get this right, because I care, I really do." I know he probably says it every show, but it seemed like he really cared, which is good, because I was getting worried that Weezer had lost it's way. With all their party songs, I felt they had stopped being an artistic endeavor and more of a band that sticks around for a paycheck. But after this concert I have to say that Weezer may have tripped but they have not fallen.
"Island in the Sun" by Weezer (MP3)(iTunes)(Amazon)
Posted by Ian M. at 9:49 PM